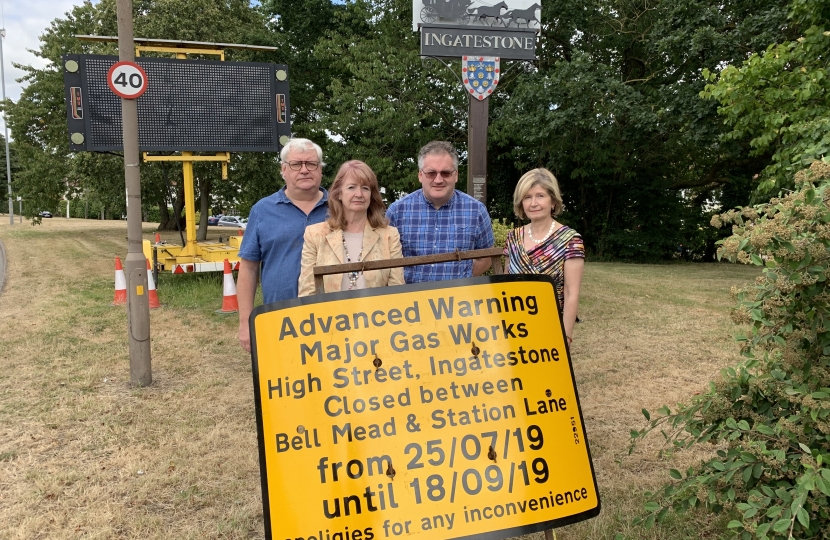 Cllr Lesley Wagland and Cllr Jon Cloke are delighted to announce that following direct intervention by herself and your local Conservative Borough Councillors they have been able to eliminate the planned closure of Ingatestone High Street for essential gas work repairs.

Many residents would have been severely impacted by closure of the road over such a long period of time.  The disruptive impact on our village and its residents closing the High Street from 25 July to 18 September was simply unacceptable.

The signs at the major entrances to our village will be updated to reflect this change and then removed.

A big thank you to Borough councillors, Jon Cloke, Noelle Hones, Thomas Bridge and all the many residents and businesses who helped County Cllr Lesley Wagland compile the 24 key questions for the contractors.  There will now be a smaller urgent piece of gas work over 10 days with temporary traffic lights but most importantly will no longer require a road closure.

The gas contractors will now work extensively with County Cllr Lesley Wagland, Cllr Jon Cloke along with our local community to properly plan for the rest of the work to be done next year.

Our £750 million support package for charities during the Coronavirus outbreak

This Government’s announced an unprecedented £750 million package of support for charities – ensuring they can continue their vital work during the coronavirus outbreak.